Java has been around since 1995 and is used by over 10 million developers in almost every country in the world. It truly is one of the most successful technologies in history. But this doesn't mean the platform is standing still. Quite the opposite in fact.

Java 8, released in 2014, brought Lambda expressions to the Java platform as well as the Stream API, Optional class, and a host of other great features. This is one of the reasons why Java 8 became the most popular version in Java's history. Even today, it remains one of the most widely used versions of Java.

But choosing Java 8 today prevents developers from gaining access to an immense amount of progress in the language, JVM, tooling, and more. This article will attempt to summarize much of this progress. But don't just take our word for it, go try the latest version of Java today!

Before we dive in, let's take a minute to view how the stewards of Java think about the evolution of the Java Platform. Brian Goetz, Java Language Architect, talks quite a bit about this subject. One talk in particular, Stewardship: The Sobering Parts, is a great starting point. Brian talks about the challenges, and joys, of being that unique type of person who is happy stewarding a language over many years, carefully balancing the forces of conservatism (move slower, stay compatible) with innovation (move faster, adapt to change), only to continually find out you've upset people on both sides. 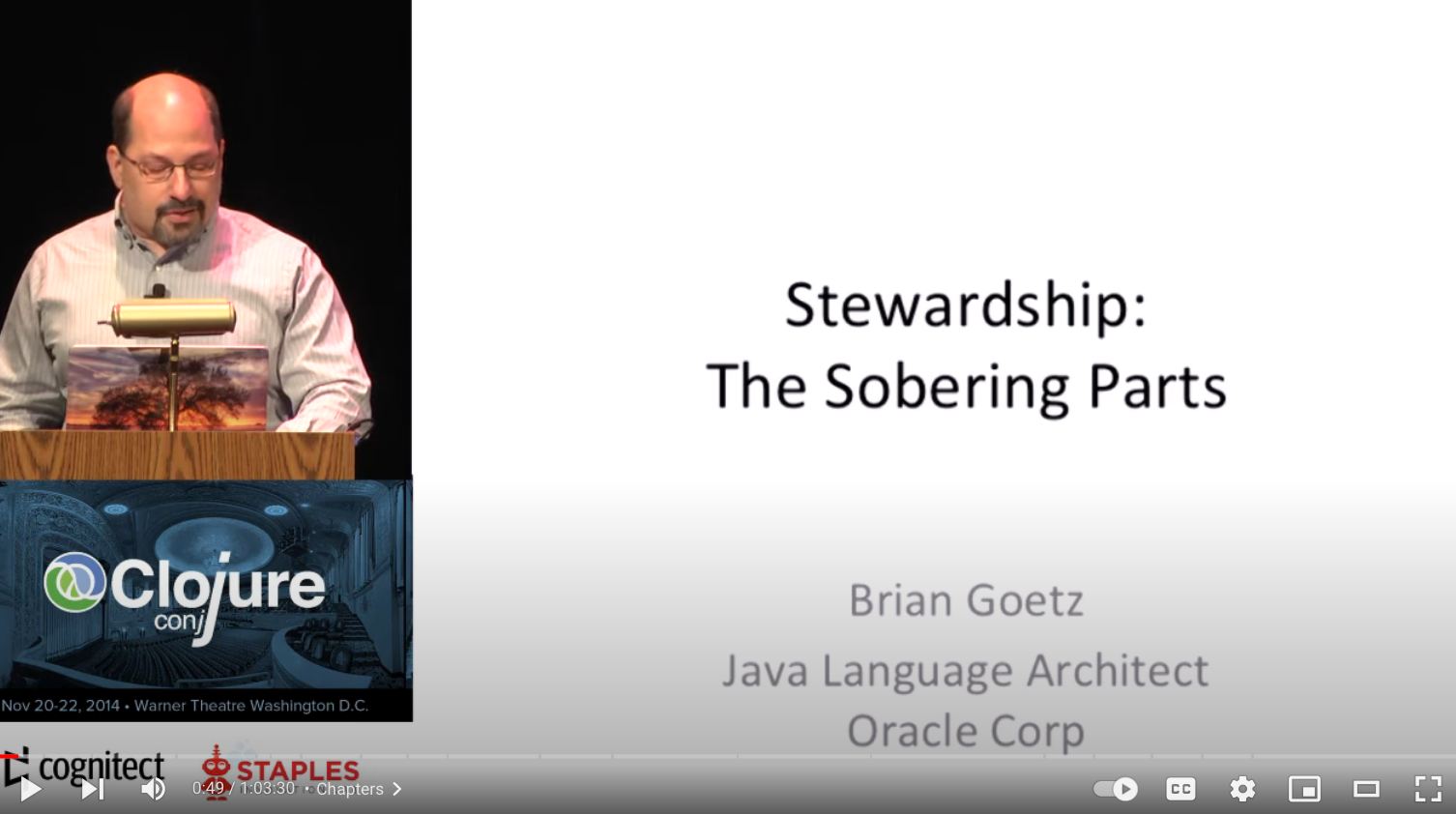 Learn more on our stewardship page with talks from Mark Reinhold and John Rose.

Now with this thoughtful evolution in mind and the careful balance of conservatism and innovation, the Java team set out to increase innovation. The foundation of this effort was in changes to Java's long-standing release cadence that was feature driven over many year cycles. First proposed by Mark Reinhold in his Moving Java Forward Faster post, Java moved to a 6-month, time-based release cadence in 2017 with a new feature release of Java becoming available like clockwork every March and September. This shift has had a dramatic impact on the ecosystem for many reasons, some obvious, and some not.

The obvious benefit to the community has been the ability for developers to get their hands on new Java features every 6 months as opposed to every 2-3 years. Multiple years is a long time to wait, providing many opportunities for developers to search elsewhere for a different tool to solve their problem. This cycle contributed to the perception that Java was "standing still" even though it wasn't. Consider this: after Java 9 in 2017, the next release under the old cadence would likely have happened in 2020. A lot can happen in three years -- and in Java, it did! For example, under the new cadence, we delivered var in Java 10 in 2018, and made significant improvements to the G1 garbage collector in Java 12 in 2019. With a wide variety of new features in each six-month release, there's no reason to miss out by only looking at Java every three years.

In addition, with 6-month cycles, the team has been able to effectively introduce (or improve upon) models to introduce features such as the preview system, and time-based early access builds, generating feedback from the community before features become standard, at which point they will be around for a very long time.

What's more, the release cadence has allowed teams to break up large features (Project Loom, Panama, etc.) and introduce them, over time, as incremental changes resulting in better project planning and better end-user experiences. New versions of Java can be tested and introduced automatically using CI/CD pipelines, rather than big scary stop-the-world events, and users will have plenty of lead time to get used to new features. For an example of this, see the section on project Amber below.

Finally, a not-so-obvious benefit is a story of productivity and happiness for the teams working on the Java platform itself. Releases are mostly "non-events" now as they've been solidified, ready, and in many cases tested in the wild through our preview and early-access models for weeks and months in advance. If this has piqued your interest in working on Java, here are some job postings.

For more maintainable programs, check out Records and Sealed Classes.

For better documentation, check out javadoc search and Code Snippets.

For experimenting and learning, check out jshell and the Simple Web Server.

A picture is worth a thousand words. Here is a picture that represents Project Amber, the release cadence, and the preview system in action over the last few years. As you can see, many of Amber's language features started off as preview features to collect broader feedback, and sometimes made slight changes before becoming standard.

Learn more about Project Amber at its wiki and Inside.java.

One of the most important evolutions of the Java platform over the years has been in performance. Everything from "out of the box" performance by just upgrading, to taking advantage of modern hardware, to consistent pause times with very large heaps, the Java Platform is getting better and better with each release.

With the help of the Java GC team, here are a few snapshots of the performance evolution over time, pulled from a blog post by Stefan Johansson. To find more great information on performance directly from the Java team, check out Inside.java.

All results are from running the SPECjbb 2015 benchmarks with a fixed heap size of 16GB, and no tuning of GC parameters. First, you can see that the throughput achieved by each collector is higher in Java 17 than in previous releases. ZGC reached production status with Java 15. 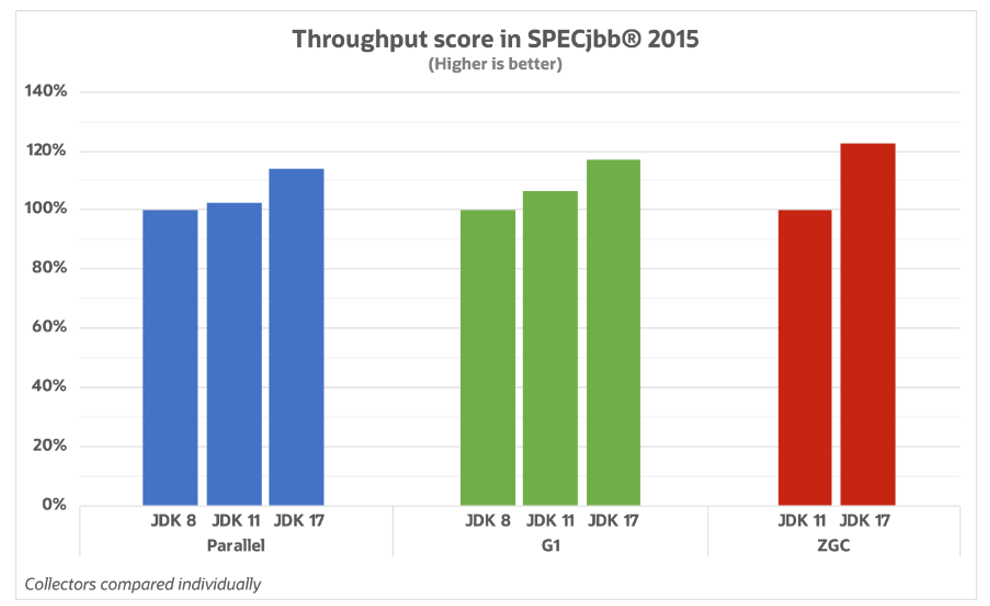 That's a pretty good reason to try your application on 17. But of course, your eye is drawn to the ZGC area. ZGC in 17 has way lower pause times than it had in 15. 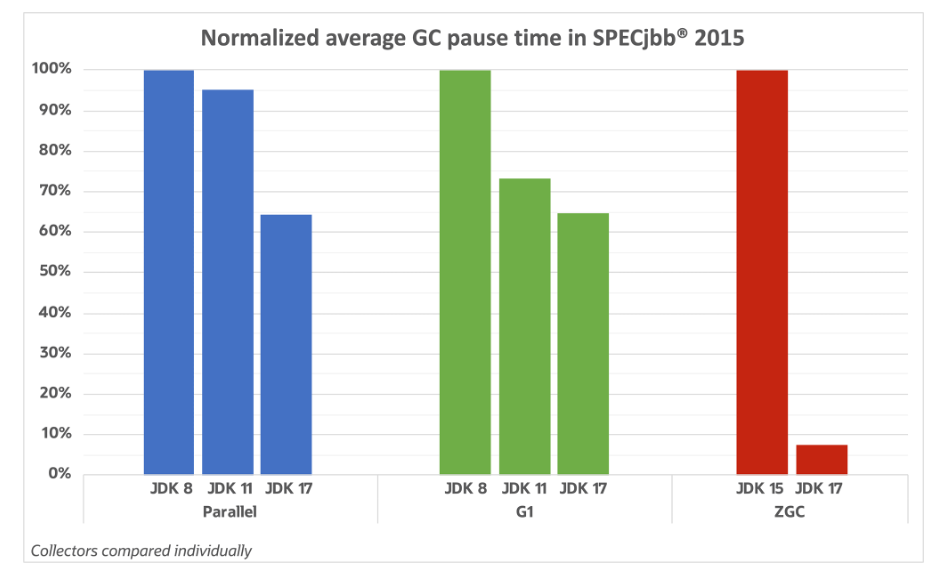 This is a LOG graph of the ACTUAL average pause times, but with an additional column for 128GB heap. Because ZGC is fully concurrent, it achieves sub-millisecond pause times on the same workload as other collectors.

You'll also notice that ZGC's pause times are constant. You can tune G1 and Parallel to have shorter pauses, but it will be hard to reach ZGC. When your product faces a 10x increase in the amount of data it has to process, the best response is to move to Java 17 and utilize G1 and ZGC. 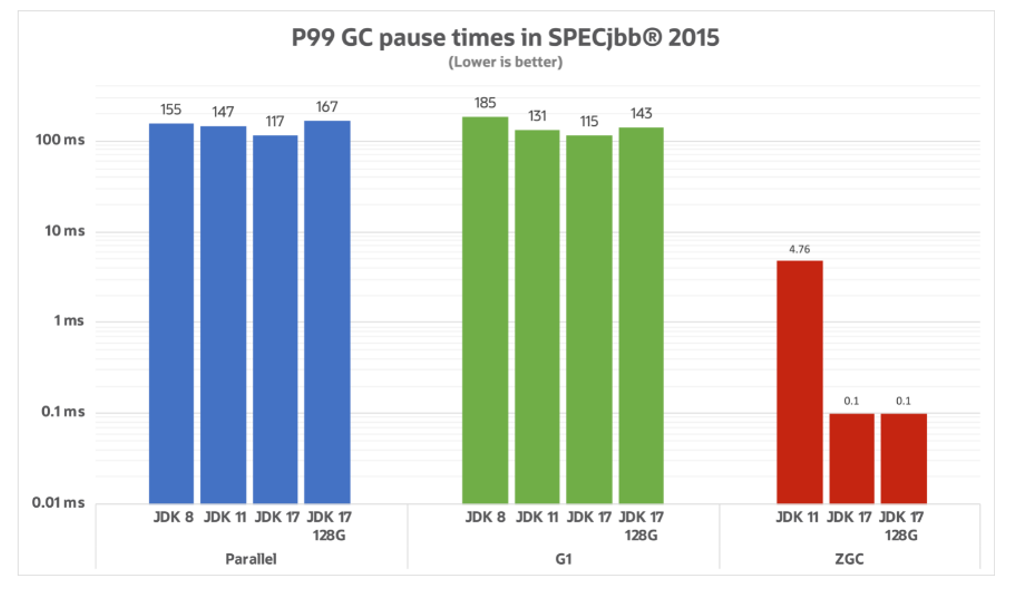 That's roughly the same as the overhead of the Parallel collector, so moving from 8 to 17 and getting G1 by default shouldn't be significant memory-wise.

We see that ZGC's low latency does come with some cost of a higher footprint, but that'll improve over releases. 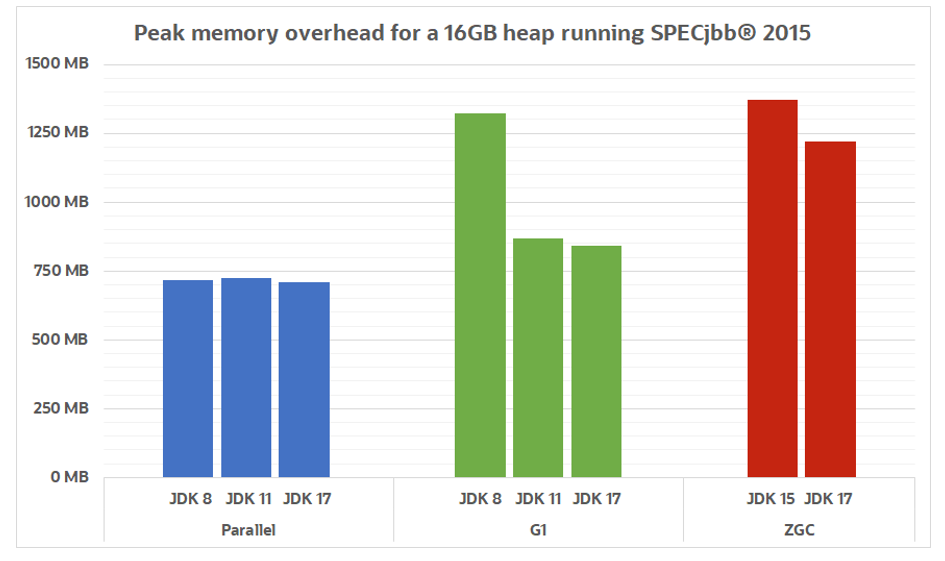 For those that want a larger laundry list of improvements to the Java platform since Java 8, categorized for easier scanning.